What is a Medical Malpractice Case?

Sometimes medical providers and physicians end up hurting the patient they are trying to help. Many people think that all unfavorable treatment outcomes are malpractice. That is not the case. It’s often hard for family members and patients to understand medical malpractice.

When the patient or their loved one suffers harm during a medical treatment, they naturally try to blame it on someone. Many times, doctors do everything in their power, but the result isn’t favorable. Though that can be unfortunate and painful for the patient and/or their loved ones, it isn’t medical malpractice. However, when a patient gets injured or suffers harm due to a physician’s negligent act, they deserve compensation. In this article, we’ll help you understand what a valid medical malpractice claim is. If you have a question about medical negligence, you can reach out to a qualified attorney at The Jewkes Firm. 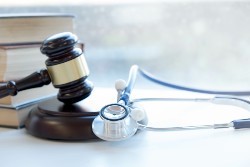 Standard of care is an essential element in figuring out whether negligence lies in the case. For the medical procedures or treatments, standard of provided care refers to the degree of skill generally employed by the physician or medical provider under like circumstances and similar conditions. That standard is generally accepted as proper medical treatment for the given condition in like or similar situations. If the patient is treated in such a way that doesn’t conform to standard or provided care, then the treatment might be considered negligent or substandard.

When a patient and/or their loved ones are considering whether a malpractice lawsuit should be filed against the medical provider, they must first examine the standard of provided care. If the physicians did everything according to the generally accepted standard, but the patient still suffered harm, there isn’t any claim. Even if it is determined that the care was negligent, there are a few other hurdles one must clear before they can pursue a valid claim.

Causation is another element that must be considered to determine if the malpractice case is viable. The question that must be answered is that whether the negligent act indirectly and directly caused harm to the patient. In case the outcome would not have changed even when the care administered was up to the standard, no claim can be made. Thus, for a claim to be viable, the victim or their family must prove that the doctor’s actions were both negligent and caused harm that wouldn’t have occurred if the doctor wasn’t negligent.

When both the above conditions are met, the claim’s viability will rest on the severity and nature of the injury/disability. Medical claims can be very expensive to pursue. They may cost a hundred thousand dollars or more. If no lasting injury or disability results from the medical provider’s negligence or in case the injury/disability is minor, the compensation awarded might not be enough to cover the expenses incurred in pursuing the malpractice case.

Your Chances of Winning the Medical Malpractice Case

This means that cases where patient suffers harm because of something that should not have happened will mostly end up in the favor of the victim. Some common situations where the fault of the medical provider is clear include:

Unless you are a physician or medical professional, it’s extremely difficult for you to figure out if the medical negligence was involved because you might not have any knowledge about correct medical treatments comprising standard of provided care. That is why it’s essential to consult your case with a personal injury attorney before you file a medical malpractice lawsuit against the medical provider.

A personal injury attorney from The Jewkes Firm can help you file a medical malpractice claim. We can determine whether the victim suffered harm due to a doctor’s negligence and whether they are entitled to compensation.